ON THE FARM: Tony Schaub at the Harlingen Arts and Heritage Museum 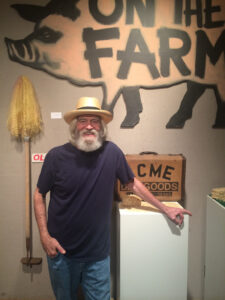 Tony Schaub pays homage to the life and times in an agricultural community in this latest show On the Farm.

Visitors to the latest art exhibition at The Harlingen Arts and Heritage Museum on the evening of Thursday, August 28th were greeted with the strains of square dance music as they browsed through the latest work of local artist Tony Schaub. His latest show – On the Farm – Schaub pays homage to the life of an agricultural community, embellished with his trademark use of word play, mixed media and his impeccable pop art sensibility.

A native of Pittsburgh, Pennsylvania, Schaub drew and painted as a young child. At the age of twelve, he was selected to attend the Carnegie Institute Summer Art Program. The next year, Tony won the Pennsylvania Scholastic Art Gold Key for his tempera/goache painting, World Series Celebration.

After serving four years in the Air Force, Schaub moved to Sun Valley, Idaho, where he continued to develop his artistic skills. His work was exhibited in private, commercial, and public collections. After winning an art competition in Idaho he traded a painting for a 1940 Chrysler New Yorker and hit the road, spending the winter at Hilton Head Island, South Carolina. En route back to Sun Valley, Tony had car trouble in Houston, showed his portfolio to a local gallery and a Texas Artist was born.

In the late ‘70s he visited South Padre Island to paint the walls of a friend’s new restaurant – Blackbeard’s. He also painted works for the SPI Convention Center and Louis Backyard. By 2006, Schaub and his wife had moved permanently to Harlingen where he maintains a studio on Jackson St. today.

Schaub is an undisputed master of modern pop. His tongue-in-cheek approach to visual art often combines word play and interesting juxtapositions to help convey his messages but leaving enough room for the viewer to make their own observations.

For On the Farm, Schaub worked tirelessly for several months in preparation for his first show at the museum in seven years.
“I didn’t cut any corners with this one, and I’m giving it my best shot.” Schaub said.

What sets Schaub apart from his contemporaries in the visual arts is that he doesn’t limit himself to producing only paintings, but instead will use assemblage, collage, painting, found object sculpture and installation techniques to make each work unique and unforgettable. 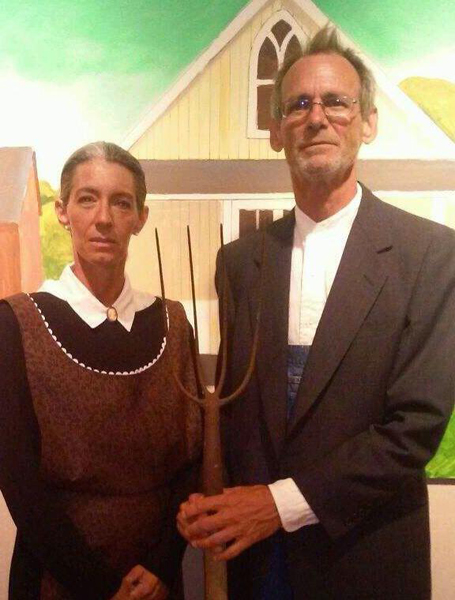 One highlight from his reception for On the Farm included an installation recreating Grant Wood’s famous painting “American Gothic” using live models as surrogates for Wood’s sister and dentist, the original models for the iconic work standing in front of a canvas recreation of the farmhouse.

Another piece, entitled simply “Square Dancing Instructions”, features a lenticular image of a hamster in square dance garb affixed to a canvas with painted and collage elements.

One piece, “Look Before You Leap”, combines found objects with photography to create a piece that literally breaks out of the picture plane, even if it doesn’t break any new intellectual ground.

The strength of Schaub’s work is how it engages viewers in a whimsical, colorful way, never demanding too much in the way of contemplation from the viewer, but instead entertaining and delighting, allowing the work to firmly ensconce itself in their memory.

On the Farm will be on display until November 9th. The Harlingen Arts & Heritage Museum is located at 2425 Boxwood Street in Harlingen. For more information please call (956) 216-4901. 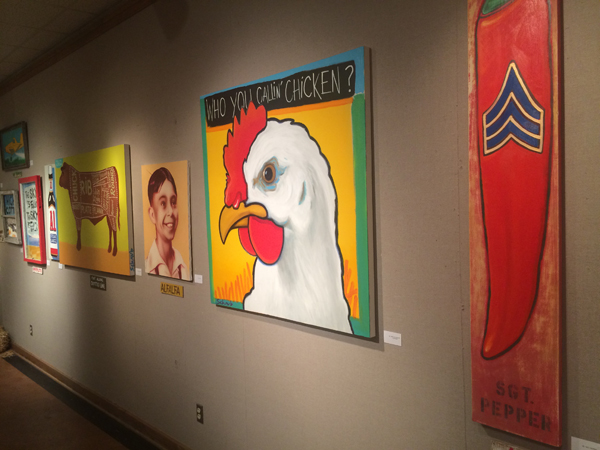 Find us on social media

enCORE exclusive: In the Studio with Alexander Comminos

Smokin’ Ribs on a Sunday

Color Surface Texture: In the Studio with Alexander Comminos