By the time he moved to walls, tagging under the nom de plume RAID, Zamudio’s skill far exceeded that of many of his contemporaries. 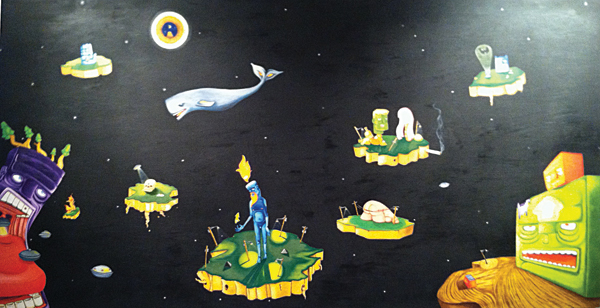 A graffiti artist for the past two years, Zamudio’s work graces walls in diverse venues all over McAllen and other valley cities including Geos, DeLorean’s in McAllen and the Rio Grande Grill in Harlingen.

Zamudio got his start in art drawing comics and sketching at a very young age. Originally from Mexico City, Zamudio moved to Texas in 1996 at the age of seven- first to El Paso and later to the McAllen area. Art was a constant companion for Zamudio as he refined his skills though his adolescence.

By the time he moved to walls, tagging under the nom de plume RAID, Zamudio’s skill far exceeded that of many of his contemporaries. He had garnered enough recognition to afford him mural commissions at several high profile local venues.

Not one to settle with the status quo, Zamudio constantly worked on his craft travelling to other cities across Texas like San Antonio and Corpus Christi to compete in graffiti events, usually travelling with local hip hop artists like his longtime friend and collaborator Evolve.

Visitors discuss the meaning behind one of Manuel’s paintings. Photo: Cayetano Garza Jr./LFN

It could be said that every artist is a product of their time and place in history, a reflection of the culture they were brought up in, and though this does hold true with Manuel Zamudio’s work he manages not to fall victim to the traps that many contemporary artists fall into. Manuel’s work synthesizes Mexican culture, hip hop, surrealism, auto-biography, and symbolism in an iconoclastic mashup of ideas and moods that manages to obscure the sum of its parts to present a style that is at once unique and seemingly familiar.

In November of last year Zamudio took part in a Day of the Dead group art show at the Weslaco Museum entitled Bailan Los Muertos which brought together several of the Rio Grande Valley’s most innovative young talents. This was Zamudio’s first “legitimate” art show, opening doors to a whole new world of venues for his colorful work.

If working on walls and in black books (graffiti sketchbooks) constituted an “education” for this self taught artist, Bailan Los Muertos was his final exam and Libertad de la Imaginacion manages to be something of a Bachelor of Fine Arts exhibit. 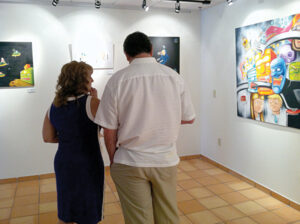 The work in Libertad de la Imaginacion is the work of a young talent at the top of his game pushing himself further and not settling for the safety of constant repetition.

In stark contrast to the large walls Zamudio is used to working with, the work in Libertad de la Imaginacion is full of small figures and symbols floating together in the black vaccum of limbo where they can play out the roles the artist has chosen for them, each one a facet of the artists ego. 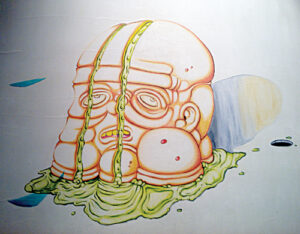 There is a sense of Latin American “Magical Realism” in Zamudio’s work without the whole being overwhelmingly ethnic. It plays well against the other themes in his work, with no one influence overwhelming any other but instead converging into a visual language that invites the viewer to contemplate their strange hidden meanings without being overtly referential.

Even with the completion of this one man show, Zamudio continues to produce new work and setting up new shows later this year in various venues all over the Rio Grande Valley and beyond.

Libertad de la Imaginacion will be on display at the Weslaco Museum until July 6. The museum is located at 500 S. Texas Boulevard in Weslaco, Texas, conveniently located on the corner of 5th St and Texas Blvd two blocks south from the Villa de Cortez. The museum is open Tuesday through Saturday from 10 a.m. to 4 p.m.

Find us on social media

enCORE exclusive: In the Studio with Alexander Comminos

Smokin’ Ribs on a Sunday

Color Surface Texture: In the Studio with Alexander Comminos